Despite the setback in New York, it is at the state-level where Knife Rights has been racking up the victories over the past several years. However, with all indications pointing towards a more friendly Second Amendment climate in Washington with the change of administration, Knife Rights has decided to “go big” in their latest push at the Federal level.

One of Knife Rights’ early victories was their changing the language of the  1958 Federal Switchblade Act to include “bias towards closure”. It is this seemingly small change that opened the door for the importation of assisted flippers (and domestic development as well), and consequently their ubiquitous presence in the knife world.

While it was unable to gain traction during Obama’s tenure as President, Knife Rights’ other major Federal effort has been the Knife Owner Protection Act. In years past, the bill has focused on protecting knife owners in-transit from running afoul of local knife prohibitions if the blade in question is legal in the trip’s origin and destination localities.

Well, they are taking it a step further this year by not only reintroducing the Knife Owner’s Protection Act, they are swinging for the fence and seeking a full repeal of the Federal Switchblade act. We at TTAK wish them Godspeed in their efforts, and join them in encouraging our readers to contact their Congresscritters and ask that they support the bill.

Knife Rights press release and action alert below the jump:

January 4, 2017, Washington, DC: Originally conceived and authored by Knife Rights in 2010 and first introduced in 2014, the Knife Owners’ Protection Act of 2017 (KOPA) now includes repeal of the archaic 1958 Federal Switchblade Act and has been introduced in the U.S. House of Representatives by Rep. Andy Biggs (AZ-05). KOPA will remove the irrational restrictions on interstate trade in automatic knives that are legal to one degree or another in 40 states, while also protecting the right of knife owners to travel throughout the U.S. without fear of prosecution under the myriad patchwork of state and local knife laws.

Knife Rights Chairman Doug Ritter said, “The Federal Switchblade Act was an asinine idea when it was passed in 1958 in a wave of Hollywood-inspired politically motivated hysteria and has only become more irrelevant as time has passed. The majority of states have always allowed switchblade possession and with Knife Rights’ repeal of switchblade bans in 11 states in the past seven years, fully four-fifths of the states now allow switchblade possession to one degree or another. With a Congress and Administration that may be inclined to finally rid the country of this abomination, it is way past time to repeal this law that only serves to interfere with lawful trade and commerce.”

Ritter continued, “from the start Knife Rights has fought successfully to defend the right to carry a knife, an essential tool, in the individual states, cities and towns. The Knife Owners’ Protection Act represents a key step to protect law-abiding knife owners simply passing through areas like New York City where possessing many commonly owned knives that are legal elsewhere may result in arrest and prosecution.”

Besides legalizing interstate trade in popular automatic knives, the measure allows for the secure and safe transportation of knives through jurisdictions where the mere ownership of a certain type of knife is enough to bring arrest and criminal prosecution.

“KOPA will simply provide safe harbor to someone traveling with knives where they can legally be possessed at the points of origin and ultimate destination,” Ritter emphasized, “the bill requires they be locked up during travel in states where they would be illegal. It eliminates the constant jeopardy of criminal prosecution for simply passing through an area. It offers no protection to anyone engaged in criminal activity.”

Knife Rights’ KOPA has teeth to defend those who travel under its protection because it also provides penalties for law enforcement, prosecutors and others who ignore the protections provided. Similar to the protections and penalties generally provided in USC 1983 to those whose civil rights are violated, a falsely arrested citizen can be compensated for the expense of defending themselves from an unwarranted violation of the rights Congress has protected in KOPA.

A FAQ on KOPA with additional details and background can be found at: www.KnifeRights.org/KOPAFAQ2017.pdf 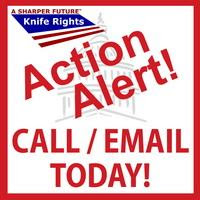 Here’s a model email or call script that you can use. We strongly suggest you keep it simple and to the point:

I support the Knife Owners’ Protection Act of 2017. I urge you to become a co-sponsor of this commonsense legislation that will protect my rights and the rights of all knife owners to travel throughout the U.S. without fear of prosecution under the myriad of state and local knife laws and it also repeals outdated federal provisions related to switchblade knives which burden citizens and lawful commerce in these popular and widely available tools that are legal to possess in 40 states.

It might really happen this time folks. Please call or write today.