Knife-wielding St. Louis man dies after being tased by police.

A knife-wielding St. Louis man died after being tased by police.

Every time an LEO shoots a knife-wielding suspect, the question is invariably asked, “why didn’t the officer use a taser?”. There are times, such as when the officer has direct backup and no civilians are at risk, when I believe it should be tried. That said, it is important to remember that “less-lethal” force is just that – less lethal. A now-deceased knife-wielding perp learned this the hard way when he barged into the kitchen of a Saint Louis restaurant, and was subsequently tazed by officers from the StLPD.

Police say around 10:20 a.m. Saturday, 61-year-old Scott Anello forced his way into the Tamm Avenue Grill in the 1200 block of Tamm Avenue prior to the restaurant opening to customers for the day. The man was reportedly threatened the restaurant employees with a large butcher knife.

Officers say they gave the man multiple attempts to put the knife down, but he refused and was tased. As he was being placed into custody, he stopped breathing and was transported by EMS to an area hospital where he was pronounced dead.

An investigation is ongoing, and likely will reveal an underlying medical condition – the perp was 61 years old. And there seems to be little ambiguity in this case with regards to the actions of the perp prior to being tazed.

Since it is only 15 minutes from Sunday Funny time, here are the other images I found:

If it set to stun, isn’t it sort of the same thing? 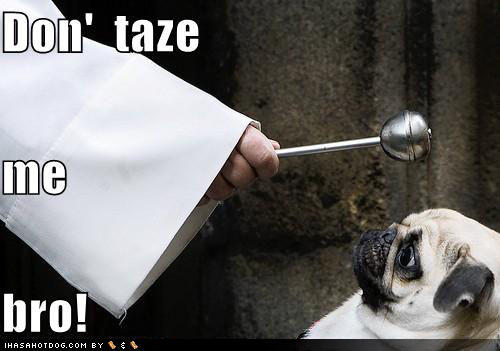 Knife-wielding St. Louis man dies after being tased by police.