Self-Defense Tip: Skip The Refried Beans. And Don’t Joke About Them Either

A Naples, Florida woman was held on $50,000 bail after allegedly wounding her boyfriend with an 8-inch kitchen knife. She apparently didn’t appreciate it when he allegedly passed gas in her face and threw the knife, hitting him in the stomach. I’m not saying that a methane jet can’t constitute an ‘assault,’ but in order to qualify as a DKU you have to defend yourself first. Stabbing the perp afterward is just revenge . . .

Deborah Ann Burns, 37, told the cops that she was watching TV that night in her Immokalee home she shares with her boyfriend when he passed gas in her face. When she approached Willie Butler about it, he allegedly became agitated and told her to “shut up.”

During the altercation Burns allegedly grabbed an eight-inch kitchen knife and threw it at Butler. The blade struck him in the stomach. Bulter suffered a minor laceration for which he was treated at the scene by EMS personnel.

Burns was arrested for aggravated battery with a deadly weapon and booked into the county jail, where she is being held in lieu of $50,000 bond on the felony count. This is not her first felony charge, however.

A convicted felon, Burns, spent 21 months in state prison for aggravated assault with a weapon and battery on a law enforcement officer.

According to the Collier County Sheriff, Ms. Burns is no longer in the county lockup. Considering her history of armed violence, let’s hope she took a quick plea deal and went back to prison. And let’s also hope they don’t serve broccoli, refried beans, or potato soup to the other inmates.

And In Other Related News… 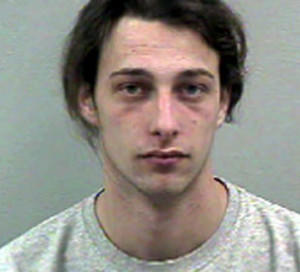 A New Britain, CT man recently pleaded guilty to murder and first degree assault charges arising from a stabbing rampage after his drinking companions taunted him about his flatulence. At his April sentencing hearing, he received 35 years in prison.

From the Hartford Courant:

The stabbing happened shortly before 11 p.m. Jan. 15, 2011 at 126 High St., where Walton lived with his friend, Justin Rodrigue. Higgins got drunk and “was farting throughout the evening,” according to a police report. People got upset at Higgins, witnesses told police.

He focused on one of them, Stacy Buccheri, and called her a “tramp,” Buccheri told police. She became so angry she slapped him across the face, after which Higgins smashed a bottle and left.

Higgins returned within an hour and, with a knife in each hand, started stabbing people who were standing on the back porch. He later told police he wanted to show everyone at the house “not to [expletive] with him,” according to a police report.

David Klett ended up with a stab wound to the chest, and Tyler Basso had one on his arm, the report states.

I’ve heard of silent but deadly, but who knew flatulence could actually kill?

Self-Defense Tip: Skip The Refried Beans. And Don’t Joke About Them Either